The study of Literature is a study into the human mind, human experience and social influences over the years. Any text is the product of its time: a study of it will teach you to read it in context and to understand the influences over the author, as well as to empathise with characters and emotions you may never encounter in reality.
No other subject enables you to experience the lives of an elderly and increasingly mad king, a failing American salesman and a jailed prisoner in the 1890s, all through the pages of prose, poetry and drama texts. In addition, you will look at literary texts in a whole different way through the application of critical lenses such as Feminism, Marxism and Postcolonialism.

Specification at a glance

You will study AQA English Literature Specification B, which is examined via two examination papers (Aspects of Tragedy and Elements of Crime Writing) and two non-examination assessment pieces (one on a poetry text, one on prose). The course will be taught by two teachers from the English Department.

In Year 12 you will study a selection from the following texts:

William Shakespeare: King Lear – the tragic story of an ageing king, whose decision to divide his kingdom between his three daughters has terrible and fatal consequences.

Arthur Miller: Death of Salesman – a play dramatising the final attempts of the titular salesman, Willy Loman, to achieve the elusive American dream.

William Shakespeare: Richard II – One of Shakespeare’s History plays, It is based on the life of King Richard II of England and chronicles his downfall and the scheming of his nobles.

AQA Poetry Anthology: Tragedy – a collection of poems which explore various aspects of the tragic genre, including poems by Chaucer, Milton and Yeats.

Agatha Christie: The Murder of Roger Ackroyd – a classic novel from the Golden Age of detective fiction, in which Hercule Poirot is tasked with solving one of his most puzzling cases.

AQA Critical Anthology: a collection of critical ideas, allowing you to explore your chosen poetry / prose texts in a different light.

Ian McEwan: Atonement – a novel about how someone’s mistaken perception of an event can have devastating and lasting consequences for others.

Thomas Hardy: Tess of the D’Urbervilles – a pre-1900 novel in which the eponymous heroine faces numerous challenges when trying to make her way in a seemingly uncaring universe.

In addition, you will study a range of unseen texts about crime: moral, social, religious as well as how writers present the consequences and potential rewards of a criminal life.

As a department, we believe that enrichment activities are an important part of your studies of English Literature and will endeavour to provide you with opportunities to attend theatre productions, external workshops or lectures or visits to sites of literary significance as part of the course.

Who should I speak to for more information? 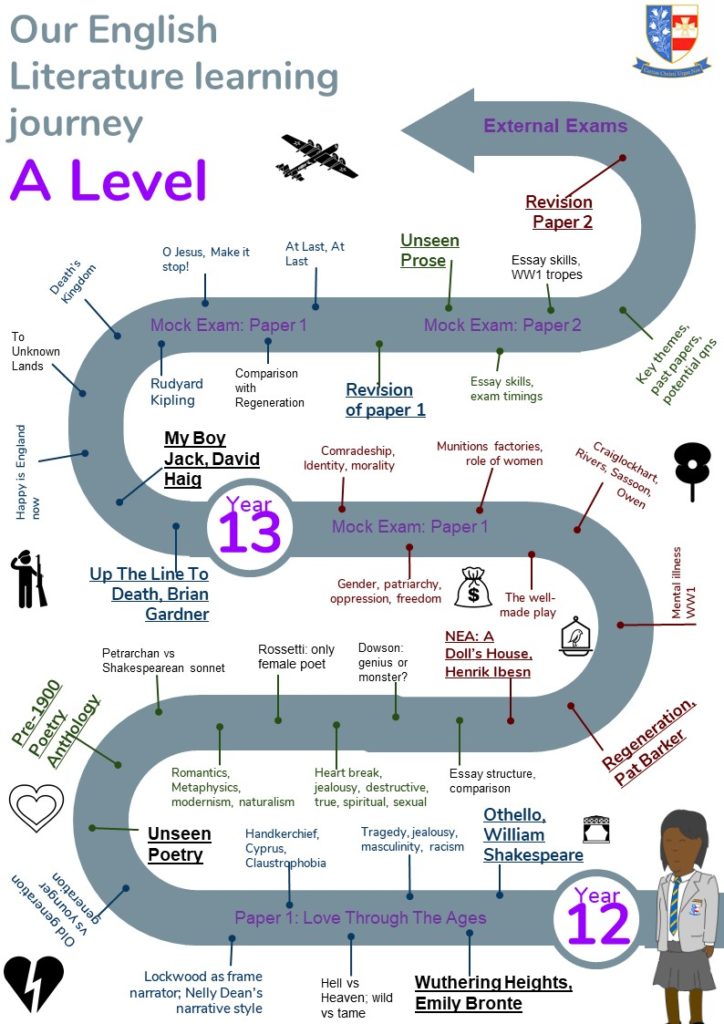